She has grown up in this place, which was founded by her grandfather.

Nicky Makris, who opened this Regina institution 30 years ago, pours coffee and serves tables in the mid-morning full house. His wife, little Marina’s namesake, greets people at the door and packs up catering orders. Her “own French toast” is on the menu.

Eight years ago, Perry Makris became part-owner, but he, too, has worked here since Day 1.

Perry was 11 when Nicky’s Café opened, but his first job was folding napkins as a four-year-old at The Diplomat, then co-owned by his dad and brother.

Nicky pushed his son away from restaurants and toward law or medicine — a Greek immigrant’s “illusions of grandeur,” says Perry. But after earning his commerce degree (with a hospitality minor) in Toronto, “The office thing just wasn’t my cup of tea. … I’m a people person, I’m very extroverted.”

Today Perry is a “dishwasher/plumber/everything,” running around refilling coffee, doling out soup, taking orders, handshaking and how-are-you-ing to almost everyone in store.

Nobody is a stranger here.

“We don’t treat the customers like a number; everybody has a name and everybody has a story,” says Kevin Foley, Perry’s business partner since buying Nicky’s shares a couple years ago.

It’s “a homey place,” which is what attracted Foley to it in 1989; he worked for six years, before returning to run the business with his friend.

Just like Nicky’s son has taken over running the business, their customers’ children have also become regulars.

“Now they have kids in their 20s and 30s and any time they come back they’re always first to say to Nick, ‘Do you remember my son …?’ ” says Foley.

“It’s just a little bit different of a place. There’s lots of yelling in a boisterous, fun style; it’s not your typical wait at the door, come in, throw coffee down. We really try to do our best to get to know the people that come here.”

And they give back to the community — this week, fundraising for Cosmopolitan Learning Centre.

All good reasons for repeat visits, but so is the food.

“We use a lot of dill here. My dad’s favourite spice for sure,” says Perry.

This batch was made on request, for two customers disappointed by the lack thereof on Monday.

“I was going to make it sometime” anyway, says Nicky, so he made it for them.

Their everyday soup is just as good — creamy lentil, which has sold “millions of bowls” over the years.

Nicky’s is known for breakfast and stays busy through lunch. (If you prefer shredded hashbrowns, get there early. By late morning, cubed is the only option.)

It’s not trendy or pretty food, but it’s hot and plentiful.

It has been “pretty much” the same menu since 1986, says Perry, in terms of the staple “Saskatchewan fare.” Hamburgers, hot cutlets, turkey dinner, roast beef, slathered in gravy and fried onions if you want it that way.

Because, “Why fix something that’s not broken?”

There have been a few tweaks over the years, though, including some lower-carb options on the menu.

“We’re a mom and pop restaurant,” says Perry. “We’re in the Warehouse District. This is an area of blue-collar people … We’re definitely not about fancy.”

It’s a place where people “from all walks of life … can sit down and chat and put their feet up for a few minutes,” says Foley. “Big boots or suits, it doesn’t matter.”

In each Thursday’s Live To Eat, I’m talking to the people who make our city’s food scene so great. And if you’ve eaten anything awesome in Regina lately, I want to know about it.

A Regina restaurant owner is hoping to fight the stigma against people fighting addictions, one job at a time.

After working at Nicky’s Cafe in Regina for more than 30 years, Kevin Foley has opened a second location in Emerald Park.

He says his goal is to hire staff who are in recovery.

“I was someone who struggled with addictions my whole life, and really, the stigma around it can keep people from actively seeking help, and I felt since I’ve been in recovery, people need to have an open dialogue,” he said. “To continue to sit in silence about it wasn’t an answer anymore.”

Foley said he dealt with a lot of shame trying to hide his reliance on alcohol and drugs for 14 years.

He started seeking treatment in December 2016.

“It’s seen as the person with the brown paper bag sitting on the street corner, but there are a lot of high-functioning people that have issues surrounding addiction,” he said.

“The more people that have awareness of it, the more ability people have to reach out, seek help, and call somebody.”

Foley is hoping to change the way people talk about recovery and create a safe work environment for people in recovery. 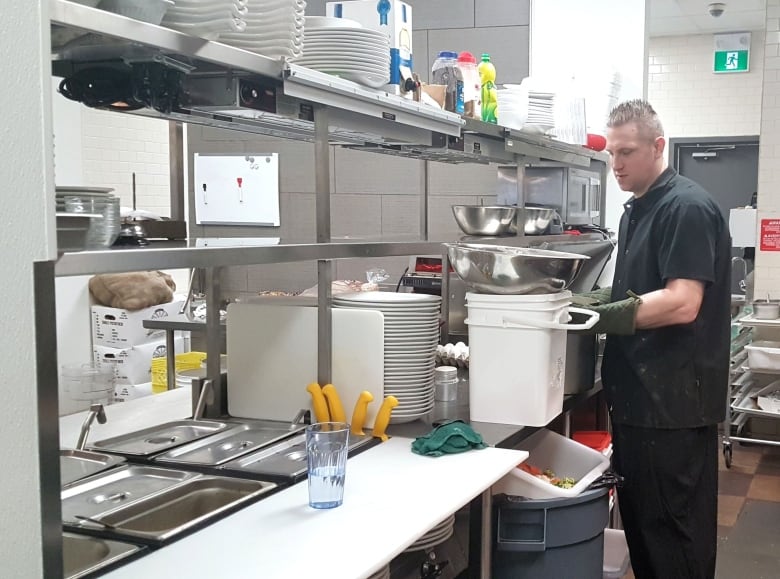 “I was at a point in my life, I woke up one day and I said, ‘I am sick of being sick.’ I am always sick and I’m always like, ‘What happened last night?'” said Brunsdon.

A DUI gave him the wake-up call he needed to get help and the chance to manage the kitchen at the new Nicky’s Cafe location.

“If I was still doing the things I was doing before, I don’t think I would have had the opportunity to come here and I probably wouldn’t have a driver’s license even to come here,” said Brunsdon.

Brunsdon says he is lucky to have kept his job, because it can difficult for many people to find employment after rehab.

“Day-to-day I still have struggles but the difference now is that it is just a thought, you know, there is no action,” he said.

Having Foley as a colleague has given Brunsdon some extra support.

“It’s really good to talk to another person who has the same struggles, so every day we have a talk. Being so busy at the restaurant, I don’t go to as many meetings as I want to because I have to be here so even just talking with [Foley] every day, with each other, it helps,” said Brunsdon.

Foley has also hired two cooks who have overcome substance use and is looking to hire more.

“The gratitude I have for myself, and for others trying to change their lives has put me in a position where I feel addiction and recovery is something that should not be put in the corner and not talked about,” said Foley.

“Anyone trying to improve themselves, there should be no issue with that.”

A new restaurant in Regina has made a point of hiring staff who are recovering from addiction as a way of fighting the stigma they may face in the workplace.

Kevin Foley worked at Regina’s Nicky’s Cafe for decades and decided to open a second location in nearby Emerald Park, Sask., where he hires people recovering from drug and alcohol addiction.

Foley told CTV News Channel the idea stems from his own experience battling addiction and noticing how recovering addicts sometimes feel compelled to keep their issues private when at work or applying for jobs.

“You should be proud of the fact you’re trying to better your life,” he said. “You don’t have to be right at the bottom to want to change and to want to be well.”

In its 30 years of business in Regina, Nicky’s Cafe has become somewhat of an institution, having served more than 3 million bowls of their famous lentil soup, according to their website.

Since opening the second location in November, Foley has hired two cooks and a kitchen manager and has plans for further hiring. He said the restaurant offers each of them the chance to talk things through when they’re struggling.

“Typically those aren’t conversations that are had within a workplace,” he said. “It’s just a way to open the conversation.”

Foley said the first few months in operation have been challenging, but rewarding at the same time.

“At the end of the day, you’re just trying to do something better for the community and that’s what our cafe has prided itself on,” he said.

Open for take out monday through saturday! 😊 8

We are open for business as usual until further no

Meatloaf Tuesday? Ok! . Such a classic and we crus

What a morning 😍 perfect way to start the week

This error message is only visible to WordPress admins


Error: API requests are being delayed for this account. New posts will not be retrieved.